After I hit 60, my body started playing a game with me. It’s a guessing game called “Is this Something? Or is this Nothing?”

This game is played for keeps. Or not. It’s played when people of a certain age get a weird, new pain, or a strange cramp, or any change in how our bodies work.

Years ago, I’d take an aspirin and go on with my day. I didn’t even have a GP! Now I have an entourage: audiologist, cardiologist, dermatologist, endocrinologist, ENT, gastroenterologist, OB-GYN, opthalmologist, orthopedist. I’m a one person medical convention because now, sometimes what I think is ‘nothing”…isn’t. That’s how I wound up in the hospital for a week–twice–in four years. It was that difficult for me to accept that my body is no longer the well-oiled machine it used to be. I”m (gasp!) mortal.

Last year I got a strange feeling in my chest while on a conference call. Okay, I’ve had them before. My cardiologist said it was acid reflux. I called his office, since it was time for a checkup anyway. The doctor on call told me to go to an urgent care center ASAP.  They took my vitals, did an EKG, and told me to get to an ER, stat. 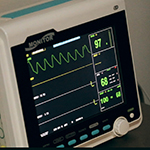 Their reaction was enough to trigger a heart attack, so I dashed over. The ER saw me right away: six doctors, x-rays, ultrasounds, EKG, blood and urine samples, and six hours of monitoring my vital signs. Their diagnosis?

I was lucky, though, because it really was ‘nothing.”  Call it whatever you want – a close call, a narrow escape – I’m just grateful I’m okay and the diagnosis was a nothingburger…barely a bump on the road in my journey…unlike the ‘little cold” that sidelined me for more than a week. (It was not Covid, but still kicked my butt- and still is.)

But how about you?  Was there an incident that you thought was ‘something” – and it wasn’t?  Tell us about your close calls, misdiagnoses, or narrow escapes – let us know in the comments!

Virge Randall is Senior Planet’s Managing Editor. She is also a freelance culture reporter who seeks out hidden gems and unsung (or undersung) treasures for Straus Newspapers; her blog “Don’t Get Me Started” puts a quirky new spin on Old School New York City. Send your suggestions for Open Threads to her at editor@seniorplanet.org.