Last time we noted the ‘birthday” of the Web (back in the days when dinosaurs roamed the earth), and asked for everyone’s ‘first time” experience with it.

Nowadays, of course, tech has expanded in such a way that connectivity is a vital element of modern life that everyone needs.  (Fortunately, Senior Planet offers the Aging Connected program to help lower income folks get online — learn more here — and tons of programming to help older people become more tech savvy.

Today we can join a Senior Planet for events like virtual fitness class, or be part of a book club, or be part of a virtual community….but in the early days it was much simpler. They say  ‘you never forget your first time, ” and these readers prove the point.

“I remember wondering what all I could use this strange object occupying a card table in my spare bedroom for! My immediate response was…recipes!”

For some, it was a dream machine…

“I began by pulling up yachts for sale anywhere USA. Window shopping and dreaming was my favorite subject.”

…but for others it was a rocky start.  Try sending newsletter content halfway around the world back then!

“…I can still remember trying to sleep in in Milan, listening to the wretched wee-ahh of the dial-up modem while he tried again and again to get through. He ended up faxing it at the post office and they had to re-type it at the other end! This would have been about 1990.”

Of course, for people like reader Eric W, the internet at the library was a vital link during a series of natural, and unnatural disasters. Check his saga in the comments.

A few people were early adopters of computer technology sophisticated (for those days), like Richard A., who was familiar with CompuServe and The Source, and first saw the web at an internet industry show in 1993.  Or Malcom S., who remembers Prodigy in the early 90’s. Pam W. even used the granddaddy of the internet, Arpanet. Check their stories in the comments.

Others had more basic “first times” …

“My very first online experience was to request a recipe for blueberry muffins.”

I remember the first time I saw an animation on the internet. It was Charlie Chaplin doing his little dance.”

How about you? We’ll leave the comments open for a while for you to share your first time.  Meanwhile, for those who missed it, the original post is below.

Did you know the World Wide Web just had a birthday?

The geneaology is a little confusing (since the World Wide Web is not the same as the Internet), but according to this report, the URL addressing capability of the internet came about on March 12, 1989. That same year, Quantum Computer Services launched its instant message service. In 1991 it became AOL.

World Wide Web for All!

In 1993, AOL began mailing everyone those CD’s that allowed everyone to go online. Remember this? 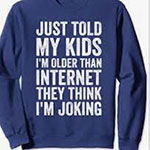 My late husband, Michael, was a programmer and an early adopter. He signed us up immediately. I still remember that first week. The first time we logged on, we spent hours looking at bulletin boards.  We finally found one board with every famous line from the Simpsons. We were up till 3am downloading every quote. It was such a fun night, full of discovery and excitement.

What about you? What was your very first online experience? Let us know in the comments!

Virge Randall is Senior Planet’s Managing Editor. She is also a freelance culture reporter who seeks out hidden gems and unsung (or undersung) treasures for Straus Newspapers; her blog “Don’t Get Me Started” puts a quirky new spin on Old School New York City. Send  Open Thread suggestions to editor@seniorplanet.org.

Photo by Christian Wiediger on Unsplash