In an often youth-obsessed society, this year’s Oscars reflect a stage where age is justifiably celebrated and recognized.

An impressive three out of the five Best Director Oscar nominees are seniors: Steven Spielberg, 75 (West Side Story), Jane Campion, 67 (The Power of the Dog), and Kenneth Branagh, 61 (Belfast).

Branagh’s Belfast earns kudos for its nuanced performances from Judi Dench, 87, and Ciaran Hinds, 69 (pictured below).  Each are nominated for best Supporting Actor Oscars. 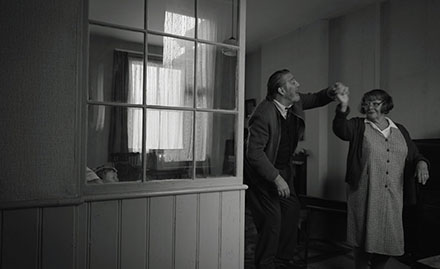 Denzel Washington, 67, is up for a Best Actor Oscar for The Tragedy of Macbeth; J.K. Simmons, 67, earned a Best Supporting Actor nod for Being the Ricardos.

Why are evergreen artists so Oscar-worthy?

“The extraordinary accomplishments of this year’s nominees are proof enough that the craft of storytelling is ageless,” said David Rubin, President of the Academy of Motion Picture Arts and Sciences. “The worlds these artists bring to the screen transcend generations and speak to something we all share. If anything, their ability to connect with audiences around the world becomes more potent with time, and we can’t wait to see what they do next.”

Chris Tuffin, Managing Partner at Sentient Pictures International, adds “Over the years we and our partners have had the pleasure to be at the casting forefront of such careers as Robert Pattinson, Ana de Armas, Terrence Howard, and Michael Fassbender.  But one of our greatest rewards has actually been re-discovering actors whose third act of their careers are equally, if not more, compelling than the prior ones.”

“…there’s a real joy in tasting a fine performance properly aged with life, love and loss to make it feel authentic..”

“Whether its our partner and film director, Pierre Morel, casting Liam Neeson in the Taken franchise or casting the marvelous Delroy Lindo in our upcoming prison drama Last Meals, there’s a real joy in tasting a fine performance properly aged with life, love and loss to make it feel authentic,” Tuffin says.

Another case in point is Morgan Freeman, 84, who remains today just as in demand as actors half his age.

“Morgan Freeman’s accolades span multiple decades. He was first nominated for an Oscar in 1988 and last nominated in 2010,” notes Highland Film Group’s COO Delphine Perrier, who is proud to have Freeman star in their upcoming thriller, 57 Seconds.

“Maintaining that kind of pedigree for that length of time is a testament to his immense skill and enduring appeal, both of which have only grown over time,” Perrier points out.

“When we recently announced 57 Seconds, our international partners jumped at the chance to buy the film, proving that this beloved actor is still a huge draw at the global box office,” she adds.

Older Women in the Spotlight

And, though snubbed by Oscar, 66-year-old Ann Dowd’s performance in the ensemble drama, Mass, has earned recognition from critics and nominations from the Critics’ Choice Awards and the BAFTA (British Academy Film Awards). West Side Story‘s cameo with 90-year-old Rita Moreno reminds us all of how she was a trailblazer for the Latin community.

Movie-goers can’t help but notice the growing prominence of streaming services producing films. (For instance, Oscar-nominated The Power of the Dog was produced by Netflix.)  Streaming services like Netflix and Amazon are now richer than traditional Hollywood studios; they can actually bankroll films (some of which may otherwise not have been greenlit).

What’s it like to be honored by the Academy?  Jane Campion, a Best Director nominee (and her film is up for Best Picture), told Senior Planet, “The support for Power of the Dog has been truly mind-blowing.”

Want a peek at her film? Check it out here.

Gill Pringle began her career as a rock columnist for popular British newspapers, traveling the world with Madonna, U2 and Michael Jackson. Moving to Los Angeles 27 years ago, she interviews film and TV personalities for prestigious UK outlets, The Independent, The i-paper and The Sunday Times – and, of course, Senior Planet. A member of Critics Choice Association, BAFTA and AWFJ, she wrote the screenplay for 2016 Netflix family film, The 3 Tails Movie: A Mermaid Adventure. An award-winning writer, in 2021 she was honored by the Los Angeles Press Club with 1st prize at the NAEJ Awards.