(This was originally published in 2013;  we’ve since updated it and run it every Memorial Day.)

One day more than 10 years ago, Dutch history buff Jo Teeuwisse found a box of negatives at an Amsterdam flea market.

There were hundreds of them, pictures of people and city scenes from the 1940s.

Teeuwisse, who works as a historical consultant for museums and films, decided to hunt down the actual locations shown in each image.

Teeuwisse then digitally combined the vintage images with modern photos of the same places and placed the best of these manipulated pictures online.

If you have ever felt that history is all around us, all the time, then these photographic “mash-ups” are your proof.

Images of Struggle and Liberation

Most of the original images Teeuwisse used were shot in Veghel, a city in the southern Netherlands.

German forces occupied Veghel in 1940 and by 1944 Allied paratroopers landed.

She later branched out, digitally manipulating WW2 photos from a collection taken as American troops liberated France and posted to Flicker by Michel Le Querrec, plus others taken in Amsterdam.

Here, American soldiers rip down the sign in front of the German Todt HQ in Cherbourg. 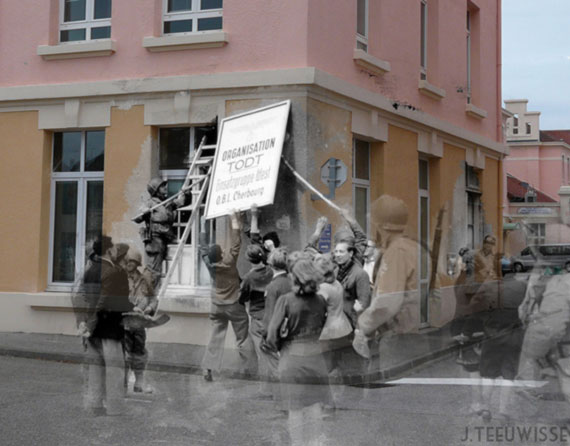 In the eerie scene below, an American GI dashes across Avenue de Paris in Cherbourg.

Rubble lies heaped against the wall of a building – that sits alongside a modern-day bike lane. 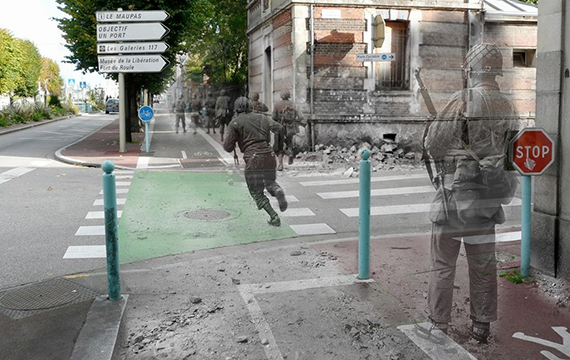 “I now make these combination photos because of my interest for the subject and to try and make people think about the past, remember and respect the sacrifices the generations before us made.”

Melding Past and Present

Teeuwisse grew up in an old house in The Hague, so she was used to envisioning the past in her everyday surrounding.

Combining the old with the new was a natural idea.

She scanned the negatives she had found into her computer and took new photographs of each featured street corner, building or public square.

Then came the hard work of carefully integrating past and present.

She uses color subtly to indicate whether the subject is in the present or from the past.

Teeuwisse’s online photo album, on Flickr, contains the full set of the Ghosts of History images (click here to view it).

One image in this collection shows members of the underground press marching in a liberation parade as modern-day shoppers and tourists stroll by (click to view this image).

A Tribute to Their Sacrifice

The grave of Private A.J. Barnes is still in the cemetery of the Saint Georges de Basly church today, Teeuwisse writes. 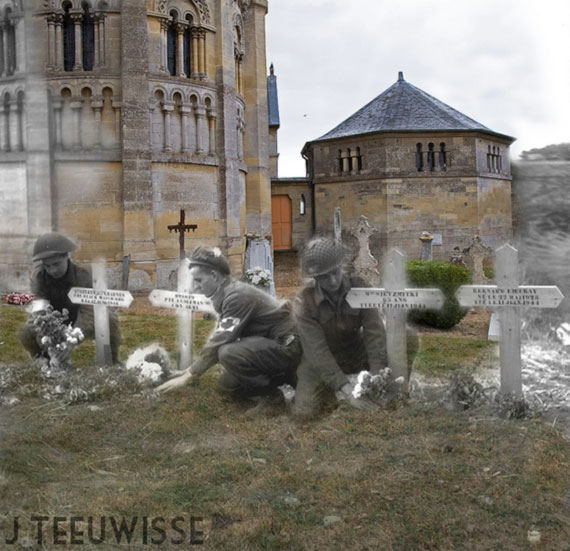 Some images remain unidentified. Teeuwisse has made folders of these mysterious photos that show daily life, war and liberation in and around Amsterdam.

Click here to take a look. You might see a familiar face from your own past, or just see something to consider this Memorial Day.