Hearing the word “crafts” may conjure up grade-school memories of glue, scissors and colored paper – but there’s so much more to them!  Crafts today span everything from textiles, painting, quilting, weaving, cooking, baking, cake decorating, home decorating, to sewing, drawing and more. And nowadays, adults are embracing crafts as a pasttime and as a great way to meet new people.

Dedicated crafts lovers like Fredi Brown, 67, of Teaneck, NJ, (pictured at top) who took up weaving and knitting about 10 years ago, get enthused when they talk about their pastime. She participates in a couple of Guilds of Weavers and Spinners. Twice a year, she goes to a quilting retreat, where ”we eat, drink and weave.” She’s developed close friendships with other weavers. When she talks about what she’s made, her enthusiasm is evident. “My favorite is knitting,” she says. “I did socks for my mom.”  But weaving is her love, too.

If the relaxation and socialization opportunities don’t entice you, some solid research finds crafting activities can improve health and wellbeing.

The love of crafting can start innocently enough, as Fredi Brown knows. “A friend of my sister-in-law’s came to my house, from Germany, in 2011, and she knit a sweater [in about a week].” This impressed her. Soon after, someone told her about a group of knitters, weavers and spinners (making yarn from fleece shorn from sheep) and she checked it out. “I was not that into weaving initially,” she says.

“Then I bought a loom.” And another, and another. So now, 10 looms later, she is not, you understand, addicted. “I’m a collector,” she says, adding that she also has 30 books on the topic. She looks forward to the monthly meeting, a chance to socialize, to hear a speaker and to learn (and also teach) new things. She recently led a class on bobbin lace, a textile made by braiding and twisting lengths of thread (wound on bobbins to achieve the result). 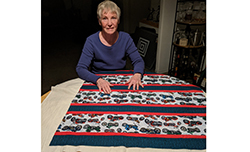 Sara Jo Brudevold, 74, of Addy, WA., does quilting and embroiders. “I make baby quilts,” she says. “It’s a tradition in our family.”  She took over the tradition, which began a half century ago, when her mom, now in her 90’s, felt she couldn’t do it anymore. Family members donate a quilt square, putting their name on it. The baby’s name, date of birth, weight, length and birthplace are displayed and it becomes a keepsake.

More than relaxing, Brudevold says of quilting, “it’s fulfilling. I create something.” She also makes a quilt for each month, displaying it on a quilt hanger in her living room.

Where To Find Crafts Opportunities

More community senior centers are offering a range of crafts. Another avenue is Meetup. There, specific queries about the craft you want to do seem to produce more targeting results—”water color classes,” not just “art,” and “quilting” rather than “homemade décor.”

If you’re into famous crafters, there are listings of crafts “influencers,” such as those in this list.

Tips: How To Find Your “Fit”

Before you dump a ton of cash, do some homework.

Stymied?  Take this quiz to figure out what might be a good start for you.