Best known for his TV sitcom, George Lopez has built an impressive career by examining his Mexican-American culture in stand-up comedy. Exporting his talents to TV and film, he featured in Fatal Instinct, Valentine’s Day and Beverly Hills Chihuahua, lending his voice to numerous animated movies. His brand of humor is often bawdy, so Lopez, 60, was shocked to be invited to star as God’s motorcycle-riding messenger opposite Edward James Olmos in the uplifting golf comedy, Walking With Herb.

Q: Are you religious?

GEORGE: I’m not a total heathen. I do have some faith and believe in a higher power.

Q: I believe Prince tried to interest you in the Bible many years ago?

GEORGE: Yes, he’d seen my comedy specials and liked my sketch, “Chaka Khan stole my sweater”. But he thought I was too profane and only agreed to appear on my talk show [Lopez Tonight], if I agreed to do my show without profanity for two weeks. Afterwards he said he wanted to be my bible study teacher. But the night before we were supposed to meet, I got really bad food poisoning and had to cancel. But Prince asked, “Well who do you think is responsible for you being poisoned?” And I replied, “The jalapeño-stuffed popcorn shrimp?” And he said, ‘No. The devil”. He thought the devil was keeping us apart while I put it down to bad shrimp.

Q: Hold on! What was “Chaka Khan Stole my Sweater” about?

GEORGE: It was based on my grandmother, who raised me. She had dementia and was in a care home. She would wig out and call me saying that Chaka Khan stole her sweater. She had African-American caretakers but couldn’t remember their names so instead she’d say crazy stuff like, “Diana Ross stole money from my purse”.

Q: Did you check out Morgan Freeman or other actors who’ve played God?

GEORGE: I watched  “Oh God!” with John Denver and George Burns, a 1977 movie that was popular in my teens. George Burns was in his 90s, playing God with a little hat and cigar, doing things to prove to John Denver who he was. He was very funny and I thought if George Burns could pull it off then I could too.

Q: You’re a keen golfer, playing in celebrity tournaments. Were you frustrated to only play caddy to Edward James Olmos’ golfer in this 18-hole comedy?

GEORGE: Initially I thought Eddie would be the caddy and I’d be the golfer – but no. Eddie hadn’t played much golf but he went to the driving range from 8pm – 11pm, hitting thousands of golf balls. So when he got to set, he didn’t look like he couldn’t play – and that’s all he needed to be. Phil Mickelson hung in there at the recent Masters and he’s 50, and Jack Nicklaus won the Masters [1986], aged 46. Golf is a game of skill not age.

GEORGE: I’m still dealing with the reality of being 60 because, in my mind and spirit, I consider myself to be very young. But it’s a number and you only feel as old as you allow yourself to feel. Am I walking around the mall in the morning? Not yet. But am I walking around the neighborhood? Yes. Am I taking better care of myself? Absolutely. Am I drinking as much as I did ten years ago? No.

“You only feel as old as you allow yourself to feel.”

Q: What was it like working with Edward James Olmos?

GEORGE: Amazing. I always looked up to him. I saw him in Zoot Suit when I was in high school and all the kids went on the bus to Hollywood. It was the first play I ever saw. I was blown away. I met him in 1988 and he invited me to his house for lunch. In the early 2000s, we became closer and began doing things together so to do this movie with him, as an actor and not a comedian, was extraordinary. Sometimes with boxers, people say ‘Those guys don’t belong in the same ring’, so I see this the same way. Looking at the calibre of Eddie’s work, you wouldn’t think somebody who came up as a comedian could even hold up to him. But Robin Williams, Jackie Gleason and Michael Keaton were all stand-up comedians who went on to become dramatic actors. 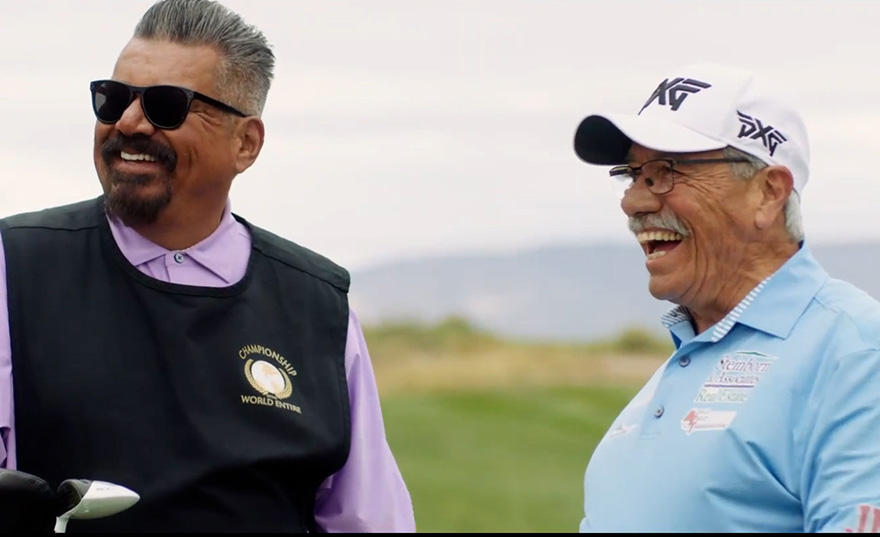 Q: How has your culture and heritage informed your career?

GEORGE: I was always a bit darker than my friends and relied on my heritage coming up because you couldn’t ignore it. Years ago, I was performing at Caroline’s in New York and was in a down place as a comedian when Dave Becky [Chris Rock’s manager] suggested I make my material more personal. I started looking at my grandmother who raised me. She was very funny and acerbic and a little bit mean. So when I started to invest in our relationship, she was almost like a muse, and I found that all the success I’ve had, was connected to my relationship with my grandmother.

“…all the success I’ve had, was connected to my relationship with my grandmother.”

Q: Who else helped in your career?

GEORGE: I don’t think I’d be in this position today without Sandra Bullock holding my hand and giving me support. We met after her mother had died [2000] and she had she had done Miss Congeniality and was the biggest movie star. But she was a bit disillusioned with the business because of this tragic personal loss. And in trying to reassemble her way back into Hollywood, we had met and somehow my eagerness to get to the next level and to prove I was funny inspired her and reignited her belief in the business. She became executive producer of my TV show and was there every step of the way.

Q: What does aging with attitude mean to you?

GEORGE: To me it means that you still like to wear your favorite clothes and colors and not necessarily chose the clothes meant for someone who is a bit older. It’s about continuing to be hip with the jackets, shoes and hair, with a little swagger. I met Paul Newman in 2006 and he made a big impression on me that he always wore white with his incredibly blue eyes. So I would like to see that for myself in the way I dress, still keeping the style.

Q: This film is about second chances and you got your own second chance with your kidney transplant 16 years ago. How are you doing?

GEORGE: I’m really good. I’d been warned early in my years that I would have kidney problems. Even at 18, I had hyper-tension which was part of it. The day after my kidney transplant surgery on April 19 2005, I woke up and felt better than I had in my whole life and, at that moment, I decided it would be a disservice for me to feel this good and not help others so I started a foundation to help children with kidney disease. My ex-wife Ann gave me her kidney which was really a gift of life. We still talk and our daughter is 25. I value this gift even more the older I get.

Q: How do you hope audiences react to Walking With Herb?

GEORGE: Regardless of whether you share what you believe in with someone else, I hope that you never lose your faith in yourself or your faith in the good.

Walking with Herb premieres April 30, May 1, and May 3 for a three-night nationwide Fathom Events limited engagement. Find tickets at FathomEvents.com or WalkingWithHerbMovie.com.