Pets make older adults happier and socialize more, one study found.  But you don’t need a study  – just a walk to the nearest park or pet special interest group. Dog owners have it easiest, with organized clubs, group walks, contests, classes, dog shows, volunteering and dog parks everywhere. However, there are plenty of discussion groups, shows and clubs for pet parents of cats, birds and other pets, even reptiles, which have their own magazine.

Sandy Weaver, 63, of Roswell, Georgia, has done them all. “When you have a small, furry and friendly pet in the house, it’s company but also a lot of connection. Some of the best friends I made for decades I met through dog clubs.”

She’s joined Siberian husky and Samoyed clubs in Atlanta and Georgia Urban Mushers, (at left) an all-breed club for dogs crazy about running. Dog sports she enjoys include bike-joring (attach the dog harness to your bike) and canicross (attach the harness to your waist, so you’re hands-free) and dog-sledding (minus snow). She won in the 60+ division of the annual Iron Paws race (video here). Breed clubs often aren’t fussy, as they’re open to friends of breed owners. “One couple brought two standard poodles,” she notes. She’s also taught classes and judged American Kennel Club dog shows.

“But of all the fun things I’ve done with my dogs, dog therapy work is the most rewarding,”

“But of all the fun things I’ve done with my dogs, dog therapy work is the most rewarding,” says Weaver, who’s visited assisted-living homes, hospitals and grade schools (where children read to her dog) through CAREing Paws. Dogs are completely non-judgmental, and won’t make fun of your accent or correct your pronunciation, she notes.

Some dog events are huge. About 1,000 Corgis from Northern California descend upon San Francisco’s Ocean Beach for CorgiCon, a twice-a-year event. The breadbox-shaped dogs beloved by Queen Elizabeth (who’s owned dozens) strut their stuff in cute costumes from pink tutus to superhero outfits, compete in races, play in the Pacific, and pose by posters of CorgiFornia. Owners chat on the beach and buy merch like t-shirts and bandannas; some come every year.

“The human-dog bond is the heart of our surf event, but what’s truly lovely is how it unites people who share the same passions: their dogs and the ocean,” says Jessica Gercke of Helen Woodward Animal Center, who sponsors Surf Dog Surf-A-Thon in San Diego County, now in its 16th year. Proceeds from lessons from SoCal Surf Dogs benefit the rescuer group. Surf City Surf Dog in Huntington Beach, Orange County, is another contest. Surprisingly, some owners of talented surfers don’t surf.

Want to teach your pooch? Here’s how! 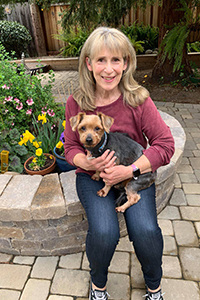 Claudia Abbott, 67, (at left) of Santa Clara, California prefers volunteering. She drives 50 miles each way to Muttville, an older dog rescue group in San Francisco, to feed, pet and walk new arrivals, arriving at 6:30 AM for the early shift, and helps at outreach events. “It’s a delightful group: we all want to help the animals; some come in rough shape,” she says. Muttville also holds gatherings and holiday parties for volunteers.

Want to get social with your pet? Our tips:

And remember – if you don’t have a pet, you can always socialize virtually with Senior Planet’s online activities – from book clubs to exercise classes and more. Check it out here.